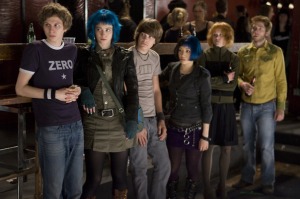 Due to a minor schedule mix-up, I missed the play I meant to see at the Flashpoint Media Lab, Separated At Birth, by Dog and Pony DC.  I was bummed since no one loves clowns (at a distance) like I do.

But happily, I was in the neighborhood and walked over to the Chinatown megaplex and noticed that Scott Pilgrim vs. The World was starting in three minutes.  And it’s a good thing too.  Going to see the movie on purpose would be completely against its whatever vibe, so at least I had that going for me.

I didn’t know exactly what to expect.  I had read very different reviews of this movie the week it came out.  And now two weeks after its release, I felt like I was really late to the party.

I don’t know how else to say this, so here it is.  This movie is not for anyone who did not grow up playing video games.  Or prone to seizures.  The effects team really stuck close to the graphic novel with lots of BLAMs and POWs and some guitar effects (that, thanks to Guitar Hero, I understood a bit).

Does it then follow that anyone who does enjoy this movie will be labeled a hipster?  Probably.  But that doesn’t mean that it is not a joyful yet realistic look at keeping love by discovering self-respect for oneself.  It means anyone who doesn’t agree 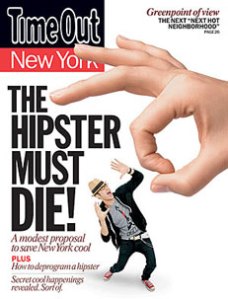 with that statement is a big grouch.  OK, or they don’t have the benefit of years of video game indoctrination and post-college doldrums to round out this hyper-active yet slothful mindset of ours.

Hipsters take a lot of abuse in DC these days–looking at you, WaPo.  But I agree with DCist here (as I usually will), by saying, “Come on, you can’t just label everything you don’t like hipster.  Use your imagination!”  If you don’t define the term hipster, you can’t say that hipsters are annoying/useless/spoiled/selfish/poor in taste…if you don’t take the time to specify to whom (to whom!) you are referring.  If you look closely, you may find that…the hipster…is you.

So go see Scott Pilgrim vs. The World and think these big thoughts.  I hope your fixxie doesn’t get stolen while you’re inside the theater.