Three artisans are traveling from Afghanistan to the United States starting in October to demonstrate calligraphy, pottery making and jewelry making in the exhibition, “Turquoise Mountain: Artists Transforming Afghanistan” on view through Jan. 29, 2017, in the Smithsonian’s Arthur M. Sackler Gallery.
The immersive exhibition evokes the historic district of Murad Khani, the home of Turquoise Mountain, a British charity, which has worked since 2006 with hundreds of Afghan artisans and architects to revive the country’s cultural heritage and revitalize Kabul’s historic Old City, which had been left in ruins due to decades of violence and neglect.
The exhibition evokes a caravanserai, a courtyard that served as a gathering and resting place for Silk Road travelers. It is recreated with more than three tons of hand-carved Himalayan cedar and includes a central pavilion and two 30-foot colonnaded arches and artisan stalls. Through large-scale videos and stunning displays of their work in calligraphy, woodworking, jewelry, ceramics and rug making, several artisans reveal their stories and the complex processes involved in creating centuries-old crafts in the 21st century.
While in the United States, three of the artisans — Sughra Hussainy, Abdul Matin Malekzadah and Saeeda Etebari — who also work as teachers and entrepreneurs, will visit venues and events relating to their fields of expertise and exchange knowledge and ideas with colleagues in Washington, D.C., and other cities. Exact dates and times of their demonstrations in the exhibition will be announced ahead of each artisan’s trip and online at  http://www.asia.si.edu/events/default.asp.
freerSughra Hussainy, Calligrapher and Illumination Artist, Oct. 5-26: 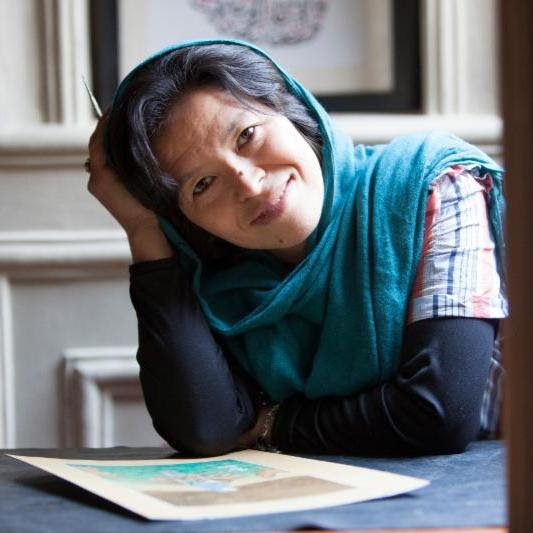 When Hussainy lost both of her parents by the age of 15, she became the primary means of support of her siblings. After three years of studying calligraphy and miniature painting at the Turquoise Mountain Institute, Hussainy is today regarded as one of Afghanistan’s most promising young artists. She has received international commissions and has showcased her work in Kabul and England. In 2014, she teamed up with the jeweler Alice Cicolini to create a unique collection of hand-painted jewelry.
“Making art is a link for me with my past — with my family and with those who went before me. I believe that while the body needs food to live, the soul needs art,” Hussainy said.
For the exhibition in Washington, she and two friends illustrated what goes into recreating a 16th-century manuscript, including the making of paper, pigments from stones and plants, and pens from reeds or bamboo, in addition to Tazhib, or illumination, the art of drawing geometric patterns or floral motifs.
Turquoise Mountain, named for a lost 12th-century city in Afghanistan, was founded at the request of HRH Prince Charles and Hamid Karzai, the then-president of Afghanistan, in 2006 with the mission of regenerating historic areas, preserving and transmitting traditional craft skills, and creating jobs, livelihoods and pride through heritage. It is a not-for-profit, non-governmental organization.

This exhibition is made possible by the support given to Turquoise Mountain Trust through the United States Agency for International Development (USAID). Since 2008, USAID support has provided education, training and increased economic opportunities for artists and participants through Turquoise Mountain.