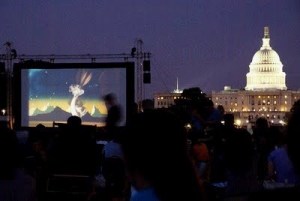 Screen on the Green is here to stay. It is safe to say SotG is a “summer in DC” institution. But, what you must keep in mind as you plan an evening of movie enjoyment under the stars (besides the possibly wet grass, bugs, and authority figures who may take away your two-buck Chuck) are the early adopters.

Early adoption, or technological change, explains how new ideas are diffused into culture at large. Here however, we will examine how early adoption will affect your Screen on the Green experience.
Chronologically, there is the invention. “Oh, SotG in Crystal City/Rosslyn/NoMa! Cool!” The early adopters will then make plans to go, arrive early with books and crosswords, then promptly take out their French baguettes, brie and fig jam in time to make others jealous. Some even have the unbreakable plastic wine glasses for their chilled Chablis.

The majority are the people who arrive later than we would like. Once we find a spot that isn’t quite as close to the screen or the center as we would like, we remember that we forgot the corkscrew, or any napkins, or the crackers. But we’re still happy to be there.

Shoulder-shruggers are like me. We sit on the periphery, quietly cursing the Metro for making us late and resolving to be early next time. The shoulder-bumpers are part of the late market, but believe they are the majority. They will bump into people who are already in place, even going so far as to asking others to move or giving the stink eye to others! The gall!

To find out to which category you truly belong, try out a Screen on the Green. Soon!
Monday on the Mall or in Crystal City
Wednesday at New York Ave
Friday in Rosslyn