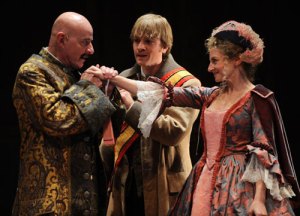 Of course, a play alternately called Optimism is going to end on a real down note.  I was so depressed leaving the theater last night, I wanted Voltaire to come back to life so I could give him a hug.

It was certainly the saddest musical I’ve ever seen (Oklahoma gets points for just being creepy).  It is also the first musical the Shakespeare Theater has ever staged.  So I give them much credit for putting it on–the costumes, the sets, the design were all magical.  Storytelling is not the problem; the choice of this story is the problem.

Leonard Bernstein composed the musical (really, just the overture) in the fifties and released it on Broadway to poor reviews.  The reviewers probably felt, as I do, that there is just too much story here to cover in a stage musical.

The songs were wonderfully sung (see the Post’s review), but the huge ideas at stake kept me from identifying with the characters themselves, crucial to my enjoyment of a play, especially a long one.

I cannot get into the entire story, but the setting moves briskly from Germany to Bulgaria, the Netherlands, Portugal, Argentina, Paraguay, Suriname, France, Italy and Turkey.  As Candide follows his childhood love across the globe, he the world challenges his beliefs in war, natural disaster, and that old favorite, the Inquisition.  Things do not go well for our hero.

The show was sponsored by On Tap Magazine, a Young Professionals event.  Tickets were $20, drink tickets included.  Upcoming Young Professionals (Young Deadbeats, if you prefer) events at the Shakespeare Theater will be Cymbeline on February 9, An Ideal Husband on March 16, Old Times on June 1 and The Merchant of Venice on June 30.

For this show and others, you can hope to get $10 tickets on Tuesday mornings.  Go to the box office at the Lansburgh Theater at 450 7th Street after 10:00 and request tickets for that coming week.