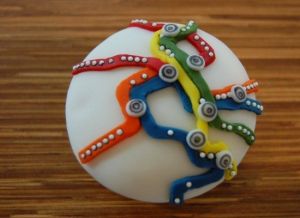 Cupcakes. What makes a good cupcake? Is it the icing? The toppings? Or the cake itself?

The quality of the cupcake is in its core ingredients, the cake and frosting, not the toppings. While I appreciate the variety of toppings and the value they can add, if the core of a cupcake isn’t right, then the flavor is just masked with toppings.

I have analyzed one of the most basic cupcakes, vanilla on vanilla, from Crumbs, Baked and Wired, Georgetown Cupcake, and Cake Love. I was amazed by the difference I found among the four places, even with such a simple cupcake.  I will focus on cake, frosting, and appearance.

The cake was by far the best at Crumbs. The cake is so moist and has a full-on simple vanilla flavor.  They put the cake in cupcake. And they don’t just give you a small cake, it is HUGE–don’t try to eat the whole thing in one sitting. The cake was also good at Baked and Wired and Georgetown Cupcake, but a better flavor at Georgetown Cupcake. Cake Love is just a disaster. How do they expect a consumer to find an “unmoist” cake pleasing? Simply terrible!

Now for the frosting. I would say it is a toss-up between Crumbs and Georgetown Cupcake. Both places really capture the hearty goodness of a simple vanilla frosting, not too bland, not too sweet. You never feel overpowered by the frosting even when you get a bite with more frosting than cake. Georgetown Cupcake is going for a perfect look with their frosting, while Crumbs is more rugged, not trying to swirl their frosting to perfection. I was very disappointed by the frosting at Baked and Wired. It was a little too sweet and made by teeth ache. I could not enjoy the natural ingredients they claim they use because of the overpowering sweetness. Cake Love is out of the running.

Finally, appearance and packaging. If you want something small, delicate, and topped with a sugar heart or snowflake, go to Georgetown Cupcake. If you want a hearty homemade cupcake that is going more for taste and size than appearance, then go to Crumbs. Baked and Wired has more of an alternative feel, which is very apparent when you walk into their stylish bakery/coffee shop that just happens to serve cupcakes. Their packaging is more retro, baked in parchment paper, and the size of their cupcake is midrange, larger than Georgetown Cupcake but not as large as Crumbs.

Lastly, cost. How could I forget this! You get more bang for your buck with Crumbs, then Baked and Wired, and lastly Georgetown cupcake.

Taking all things into consideration, the best cupcake place in town is found at Crumbs, followed by Georgetown Cupcake, then Baked and Wired, and lastly, Cake Love, which should not even qualify to be on any sort of list.