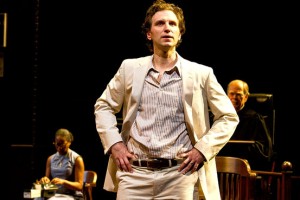 “I didn’t know what I was in for.” Famous last words….or just the beginning? My first trip to the newly re-opened Arena Stage  just off Waterfront Metro station in Southwest was yet another reminder that DC’s theater scene is most certainly first-tier.

A Time to Kill is based on John Grisham’s first and most autobiographical novel (read more about that in the program).  Set in the Clanton Courthouse (“and its environs”) in mid-1980s Mississippi, it’s a fast-moving, legally complex plot built on the tangle that comes of humans sorting out consequences of the most primal humanity—rape, revenge, and justice.

The set is simple and strong—the same table, chairs, steps, and windows rotating around to different angles stand in for the courtroom, law office, and Brigance home. Multiple television sets at the back and sides of the stage bridge live scenes with fake newsreel coverage of the trial events, and provide reminders of the time period even during intermission (hello Jazzercise).

Taking a turn from his happy-go-lucky Broadway musical resume, Sebastian Arceuls leans into both the bravado and bewilderment of his role as young lawyer Jake Brigance. His verbal swashbuckling with Brennan Brown as Rufus Buckley took me back to my own college debate days. (If, like me, you decided to brave DC without a law degree, the program includes a short legal glossary for brushing up on courtroom lingo before the lights dim.) Long-time DC residents should also keep an eye out for JC Hayward, DC’s first female news anchor as Felicia Albright, a local Mississippi reporter.

Regrettably, the play’s female roles were the weakest—I found it hard to see the characters of Ellen (Rosie Benton) and Carla Jane (Erin David) as more than puzzling skeleton outlines when compared with their action-shaping male counterparts.

The Arena Stage delivered well on its mission of putting the “American spirit in the spotlight.” A Time to Kill showcases both the burden of a flawed past and the privilege of shaping justice in our flawed present.

A Time to Kill closes July 19th—and don’t forget to check out their creative savings programs, including discounts for students, SW residents, and Metro riders!