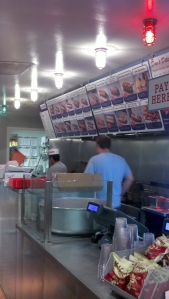 People who have lived in the District for over a year inevitably start trying to sum up current and past fads.  Usually done with a wave of the hand or toss of the head (or both!), we can say things like, “Yeah, first it was cupcakes, then crepes, now it’s hot dogs.  What will those crazy kids think of next?”

Hot dogs are, I’ll admit, not my first thought for a pick-me-up.  They just don’t look attractive somehow.  You know what I mean.  Huh?  You don’t?  OK, let’s just move on.

Could it be that the hot dog, while not as European or cosmopolitan as the crepe and cupcake, is a reaction to the Great Recession?  All-American, affordable, and customizable, a hot dog could be just what we need right now.  It’s the Sarah Palin (in 2008) of fads!  Or maybe the Ron Paul.  It’s definitely a Republican.

But whatever we decide to call it, it can be truly delicious.  I’ve had some poor hot dogs, but the ones at DC-3 leave them far behind.

Located in Eastern Market at 8th and E Streets, SE, DC-3 serves up hot dogs named after various places around our great nation (and beyond).  Anytime you’re homesick for Chicago, Cincinnati, Tuscon or San Francisco, you can just come here for a taste of home.

The name for the Matchbox-owned outpost comes from the Douglas DC-3, a revolutionary aircraft flown in World War II, it’s also a handy gimmick for a place in the heart of DC.  The decor is all forties: vintage soda bottles, paper caps worn by the grillers, and high bar stools at the tables.  The atmosphere is very Buddy Holly soda-shoppe-y.  With pictures of the hot dog options and a cheerful hot dog jerk to take your order, it’s easy to feel pretty good about life in general.  No matter what state your portfolio is in.