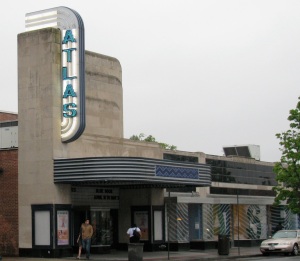 Starting a four week run at the Atlas Center on Monday evening, Rorschach Theater’s After The Quake has a giant frog.  A giant…frog.  Who doesn’t love their plays with a dash of hopping frog legs?

OK, it’s not all about a giant frog.  The story centers on the age-old conundrum of guy-is-friends-with-girl, guy-falls-in-love-with-girl, guy-doesn’t-want-to-lose-friendship, some-other-guy-of-course-steps-in.  Heartbreak ensues.

The stage adaptation melds two separate Murakami short stories (Super-Frog Saves Tokyo and Honey Pie) seamlessly.  Our…hero is the wrong word…our guy, Junpei, lives in Japan in the nineties, nursing his love for Sayoko from afar, while maintaining a friendship with her husband, Takatsuki, and caring for their daughter, Sala, as she suffers nightmares after the 1995 Kobe earthquake.

Their story fades in and out as Junpei narrates his situation in the third person.  He also narrates a short story he’s writing, the story of Frog, a human-size amphibian who appears to Katagiri, a lowly bank employee.  Together, they conspire to save Tokyo from an even bigger earthquake, which Frog predicts will be caused by Worm, a pissy…well, worm, whose machinations below the surface cause earthquakes above.

The story, reviewed in detail here, contains ample room for questions and interpretation.  As Katagiri and Frog fight Worm, it is helpful to think of the three of them as Freud’s id, ego, and superego, fighting for possession of Katagiri’s identity.  After all, we don’t know if Frog is real or not.  It’s up to the audience to decide, though after Frog’s stolid declaration of his existence with a question, “Shall I croak for you?” I desperately want to think of him as real.

Back in the love triangle, Sala’s nightmares about The Earthquake Man who is coming to put her in a box shed light on the way Junpei is living his life–so timidly, refusing to reach out for what he wants.  He has put himself in a box, and it takes an earthquake to shake him loose.

The play runs a little long, but that is the result of putting two stories into one.  Now one story, After The Quake sheds light on the tricks our own personalities can play on us.  What Junpei needs, Sayoko’s love, is exactly what he can’t take, just because he needs it so much.  Does that make sense?  No, of course not.  It’s life.