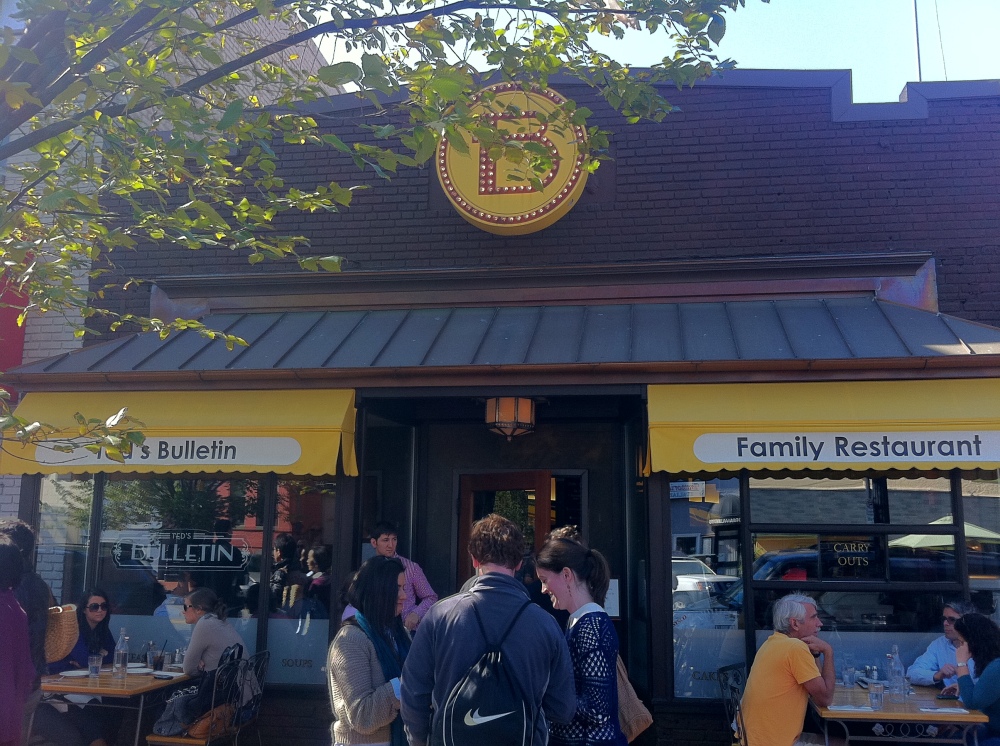 I’ve been waiting to do a review of Ted’s Bulletin, almost since I first moved down here. But there was no way that one meal could do it justice, so after four visits (with definitely more to come), here is my take on Ted’s.

For those living in North or Southeast, Ted’s should become a staple, if it hasn’t become one already. For my Northwestern friends, it’s absolutely worth a trek across town.

My first visit to Ted’s was also my fourth day in the District. The week of moving had been emotional and I still hadn’t finished unpacking. A friend from New York had come down with me to help me set up and attend a conference that weekend. She showed up at my house at 8am on a Saturday and told me to get dressed so that we could get breakfast before her bus. Someone had recommended Ted’s and she insisted that we go.

Since we went so early on a Saturday, we only waited a few minutes. However, if you go during normal brunch hours 10am-2pm, you should probably make reservations or be prepared for a long wait.

Anyway, on that cold, rainy February morning, emotionally exhausted from my move, I ordered the appropriately named “Mark On An Off Day” breakfast (with egg whites). Bear in mind, I am not a big fan of eggs, especially since I can’t eat “egg yellows.” If you’re looking for comfort food, this is a great choice. The coffee is pretty good and the service was attentive, especially on a busy Saturday morning. Most importantly, the experience was comforting during an especially stressful week in a new city.

My second visit to Ted’s came a week later. A few friends from New York were in town and Ted’s was one of only like, four restaurants I knew of at the time. We went again on a Saturday morning and this time, I went healthy and ordered Jon’s Omelet (which was also delicious). One friend ordered The Walk of Shame Breakfast Burrito, which she really enjoyed. Another ordered Nana’s Beer Biscuits and Sausage Gravy and apparently it was comparable to an actual grandmother’s biscuits and gravy…situation.

However, despite these delightful experiences I knew that I couldn’t write a review until I tried their famous homemade pop-tarts or an adult milkshake. Or tried a meal other than breakfast.

I had my first non-breakfast meal there about six weeks into my life here. A friend and I decided to spend the day “caféing” and went to Ted’s for lunch after having being extremely indecisive about where to eat (seriously, we went to about four other places and even tried samples. So sorry, other places! We were the worst). The lunch crowd was fairly sparse and it was easy to get a table. Our server was also attentive, almost more so than was conducive to peaceful eating. But that’s probably better than emotionally unavailable and passive-aggressive, right?

All of the lunch sandwiches can be made “healthier” with a wrap option, rather than a bun or bread. I was unsuccessful at convincing my friend to order The Famous Grilled Cheese & Tomato Soup as a wrap (come on! That server was way too attentive!), she order the Tzatziki Greek burger. I ordered the Cali Club. She loved her burger, but my sandwich wasn’t amazing. It’s fine–I can try again. If this was the only smirch on a so far stellar record, I’m ok with that. As Ayn Rand would say in 1,000 pages (if she were a restaurant critic): not every sandwich can be special (There. I just summed up her whole canon of work for you. You’re welcome, DC).

We were so full from lunch we couldn’t order pop tarts or adult milkshakes. Like Jack Shephard, I knew that I had to go back.

And I did. On a fateful, Friday night–a Good Friday night, if you will–after indulging in another DC treasure, I went back to Ted’s. And despite all the other temptations on the menu, I ordered a pop tart (peanut butter and bacon) and an adult milkshake (Dirty Girl Scout). And though I know that the caloric intake of both probably equaled one’s daily allowance, they were amazing. The pop tart was an amazing mixture of salty and sweet. If they have that flavor when you go, definitely order it (unless you’re allergic to peanuts or you don’t eat bacon). When I mentioned that I was reviewing Ted’s for this blog, the bartender gave me another pop tart on the house. It was brown sugar and cinnamon (so basically, a tasty peanut/bacon-free alternative).

As for the Dirty Girl Scout. As Ayn Rand would NOT say, I recommend sharing. There’s no way you can finish that whole thing by yourself. Well, there was no way I could finish the whole thing by myself. Not only do you get brainfreeze, it’s just really filling. Still, as far as taste goes, it was delicious and is a staff pick (although, next time I want to try the Grasshopper).

Finally, besides the delicious menu, what is it really about Ted’s? The restaurant has a great retro decor. Even the menus are designed to look “old timey.” The ambience is definitely unique.

I hope one day you can join me at Ted’s–for a Grasshopper maybe? Or a cocktail (they make one with a fig jam–I mean that’s just begging to be tried)? Now that I’ve met Ted, I’m
looking forward to getting to know him better.