Since DC Style Is Real editor-at-large has been largely out of the country for the past few weeks, a guest entry will ease us back into regular posting.

For the better part of the time I’ve lived here in DC, I’ve lived within a syringe’s throw of Malcolm X/Meridian Hill Park. I’ve enjoyed this park on many an occasion and in a variety of forms. Pick-up frisbee games, picnics, snowmaggedon-era sledding, you name it. But I’ve always wanted to write one of those guide-book things about my local park. So here goes.

First off, let’s focus on the name. Its official name, as per the National Park Service, is “Meridian Hill Park.” Now all DC residents know that this name is derived from the eccentric billionaire, Johannes von Hill, who emigrated to DC in the early 1900s and willed this land to the government on the condition that drum circles be held there every Sunday afternoon, pending inclement weather or hippie shortage. But the park’s website delves further into its history and digs up this nugget: “In 1819, John Porter erected a mansion on the grounds and called it “Meridian Hill” because it was on the exact longitude of the original District of Columbia milestone marker.” Who’s right? The National Park Service or The PoopShit’s archival research wing? Like who shot JR or what types of unspeakable things I’ve done for a Klondike bar, this episode in history is likely to remain covered in a shroud of mystery, possibly with a thin, chocolate coating encapsulating delicious vanilla ice cream.

If you continue to believe the National Park Service’s side of the story, “During the 19th century the environs of Meridian Hill became host to Columbia College, precursor to George Washington University.” At this point its name changed from “Meridian Hill Park” to “Safety School Park.” Zing! Just kidding. We kid because we love. Go Colonials!

Anyway, I digress. “In 1910, the grounds were purchased by the United States government and transferred to the stewardship of the Office of Public Buildings and Grounds….

Wow, sorry, I dozed off there for a second. The word “stewardship” used in a sentence that does not involve “mile high club” tends to do that to me. So I’m gonna skip over the rest of this stuff and get to my walking tour–with pictures!

First though, a very important side note. You may notice the post is entitled “Malcolm X/Meridian Hill Park” yet the Park Service website does not contain any reference to Detroit Red. Well here’s the skinny. Back during the Civil Rights era this park was a big meeting place for rallies, marches, and protests, with some very prominent civil rights leaders like Angela Davis setting foot and giving speeches here. It was unofficially given this name by nearby residents–who at that time were almost all black–but later on as gentrification spread and the demographics of “Chocolate City” began to make DC more like “Chocolate City with a Vanilla Center,” the new white residents opted for the less black nationalistic name “Meridian Hill Park.” The debate rages on about its proper name, but I’m glad to see the signs for the park at least acknowledge its full history.

Anyway, enough actual history. Who’s ready for a photo journey?! First, some legal fine print to get out of the way. As per the sign greeting me upon entering the park, “As of February 22, 2010, a new federal law makes possession of firearms in national parks subject to local and state firearms laws.” I’m not sure whether this applies to virtual and/or PoopShit-guided tours, but you should probably play it safe and leave your firearm(s) behind before you read any further. Don’t worry, it’ll be there when you get back. Just maybe hide it somewhere where it won’t get stolen, like under a potted plant or in your microwave. Just make sure you write down where you hid it otherwise you’ll forget once you get back! Like, where did I park my car in this massive lot, hello?! Seriously though, that’s like criminally negligent, so like text it to me or something too in case you lose that scrap paper.

Now that we’re all legally cleared, in we go! The first thing you’ll notice when you enter from the Southwest corner (by 16th and Florida) is a bunch of these compass-looking things:

By my count, there’s either 12 or 15 of these–I forget, my fingers only go up to 10–but they’re arranged to form the outline of a rectangle. These compass points likely have something to do with the park being located on what the early city planners were going to make the new starting longitude line for all maps (“Meridian”, get it!) since using the existing line would mean kowtowing to those tea taxing, domicile-quartering, Prime Meridian-hogging Brits. But I’m no fool. I’ve watched half of one of those Dan Brown movies on a plane and seen that creepy stuff on the back of dollar bills, so I know these compass points are part of some unholy freemason conspiracy. If the PoopShit goes offline for more than 7 days after this post you know what ugly fate has befallen me. In that case, please keep thetorch burning and spirit of this blog alive. Also I want my tombstone to read “Loving son, loyal friend,

vengeful ghost.” Anyway, another interesting thing I noticed when looking at these sinister-designed compass points:

Shadow puppet! It sort of looks like a horse’s head is coming out of my stomach, right? Whatever, this was REALLY hard to do with one hand holding on to my camera phone.
Next on our stop is the kind-of-reflecting pool:

I say “kind of” because sometimes it’s got this thin layer of opaque algae where it doesn’t reflect much but Park Service negligence (BOOYAH!), but also because it has built in fountains that are turned on and off at a schedule known only to the lady of the lake beneath. After I took this picture a lone duck flew in and started to get its swim on, and I couldn’t help but think how hilarious it would be if one of the fountain jets went on and shot the duck up into the sky. Actually that may explain the firearms ban because that we be just too damn tempting.

The deal with the pool is that it forms of basin of this pretty sweet looking water cascade, that when functional, looks like this: 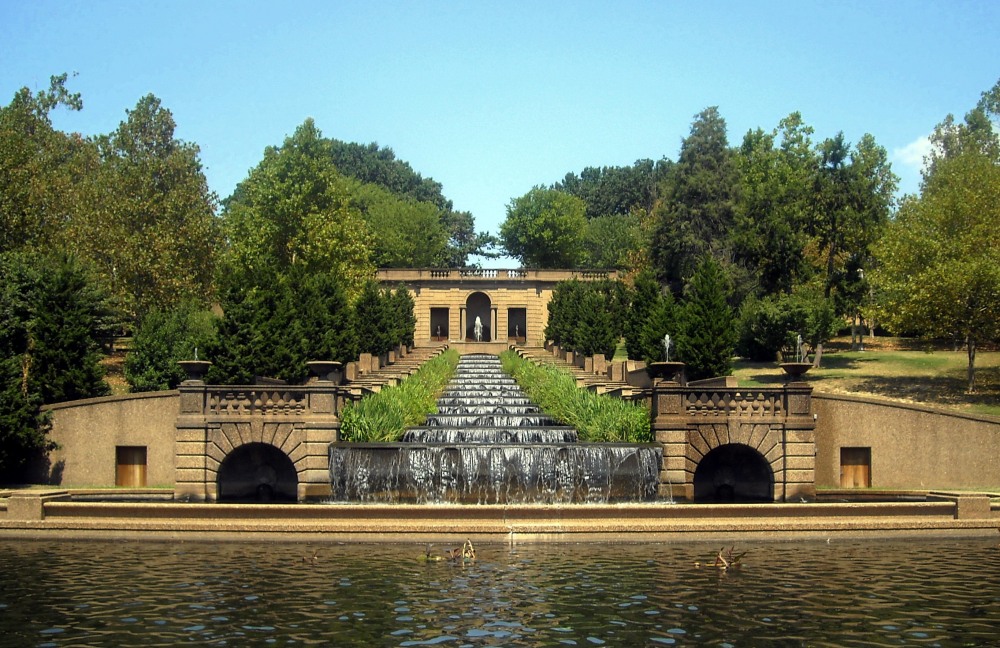 Not bad, huh? Shades of an Italian villa, perhaps? Make you hungry for some breadsticks and a never-ending salad bowl? Can you say “Si!” (Not the Spanish si though, the Italian one. Damn romance languages). Though without the water turned on its a bit less impressive and looks sort of like an experimental Excitebike course design.

Before moving on to the next stop which features the first statue of this fantastic voyage–OMG I know, right!–one thing caught my eye. Flanking both sides of the bottom of this cascade thing is a smaller wooden door, captured in poor light thusly:

Conspiracy theories abound about these miniature doors. Gateway to Narnia? Sleeper cell for Keebler Elves? Some crap Nicholas Cage was looking for in one of those stupid National Treasure movies? Unfortunately they’re padlocked, and since you stupidly forgot to bring your firearm with you so we can shoot the lock open, we’ll have to skip this part of the tour. Fortunately, though, the next stop is….a statue of an actual United States President!!!

Holy crap is that James Buchanan? The James Buchanan? 15th president of the United States and only one to remain a bachelor during his entire tenure in office?* It is indeed! He did all kinds of cool stuff, like preside over such shining moments in US history like the Dred Scott case and the Panic of 1857, allow the country to descend into civil war, and judging by the spelling of his name in this statue, outlaw the use of the letter “U.” That’s right, suck it other consistently worst-rated presidency of Andrew Johnson! According to historians/Wikipedia, he told Lincoln upon his departure “If you are as happy in entering the White House as I shall feel on returning to Wheatland, you are a happy man.” To which Lincoln replied, “That’s it! I have had it with these motherfucking snakes on this motherfucking plane!” Or so the legend goes.

Unfortunately Buchanan isn’t memorialized by his farewell words to Lincoln on the other part of the memorial, and instead there’s some crappy quote that basically translates to “a nobel spirit embiggens even the smallest man.” There’s also two creepy looking “classical figures representing law and diplomacy” flanking him on each side, but I don’t want to post pictures of them and give them the satisfaction of victory from the staring contest I lost to them.

The only other thing of note on this lower portion of the park are some steps that lead up to the more fun, statue-filled upper portion. I didn’t take a picture of them because, um, they’re stairs, but if you insist, just use your imagination and picture three-dimensional rectangles of increasing height stacked one behind the other and you’ll pretty much get the picture. Again, nothing too special about these steps. In the springtime people do their best Rocky impression and run up them for exercise, in the winter during snow storms people do their best Cool Runnings impression and sled down them, and then in the balmy summer and crisp fall birds shit on them.

This magical mystery tour is taking longer than I thought, so I’m going to stop it here and continue on to Part 2 tomorrow, where we’ll see all kinds of fun statues (yay!) and signs dictating proper lawn usage (boo!).

Written with undeniable verve by friend of DC Style Is Real, Ryan White.  Read more from Ryan here and here.