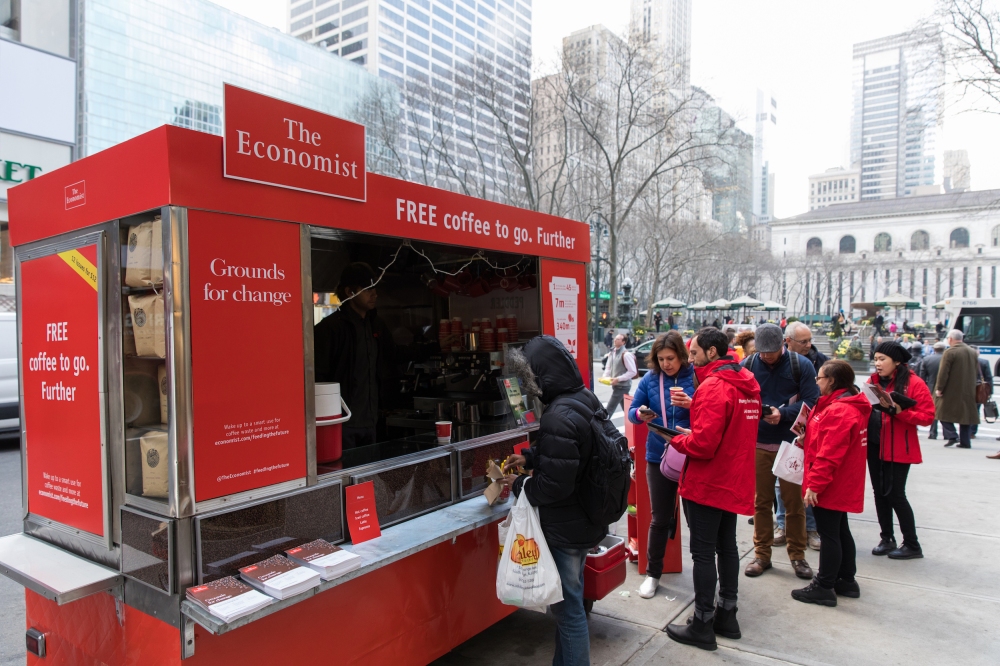 The Economist Branded Coffee Cart Around Washington D.C. to Offer Passersby Free Cup of Coffee and the Option to Turn Used Grounds into Compost

WHO: The Economist, a leading source of analysis on international business and world affairs, will be bringing its consumer engagement program, “Grounds for Change,” to Washington, D.C. on April 16th, as part of its Feeding the Future campaign. The program is based on The Economist’s report  “Oil in Your Coffee”, which articulates little known uses for used coffee grounds, including creating biodiesel fuel.

WHAT: Through mid-May, an Economist-branded coffee cart will take to the streets of Washington, D.C. offering passersby a free cup of coffee in an effort to highlight innovative ways to recycle coffee grounds. Consumers who participate in the program will have the opportunity to subscribe to the publication at an introductory rate of 12 weeks for $12, and as a special gift can opt to have The Economist plant a tree on their behalf.

DETAILS: “Grounds for Change” launched Tuesday, April 16th  at and will run through mid may at the following locations:

Saturday, May 11 – Downtown Fest One Loudoun from 10AM-6PM

MORE: The Feeding the Future campaign is a part of The Economist’s live content marketing program that aims to attract new readers through creative and provocative experiences. The program, created in collaboration with partner Sense New York (a brand experience agency specializing in real world thinking), aims to educate the public on the facts surrounding their food waste and food production.

About The Economist:
With a growing global audience and a reputation for insightful analysis and perspective on every aspect of world events, The Economist is one of the most widely recognised and well-read current affairs publications in the world. In addition to the weekly print and digital editions and website, The Economist publishes Espresso, a daily news app, Global Business Review, a bilingual English-Chinese product and Economist VR, a virtual-reality app. Economist Radio produces several podcasts a week and Economist Films produces short- and long-form video. The Economist maintains robust social communities on Facebook, Twitter, LinkedIn, Snapchat, LINE, Medium and other social networks. A recipient of many editorial and marketing awards, The Economist was named the most trusted news source by the 2017 Trusting News Project Report.