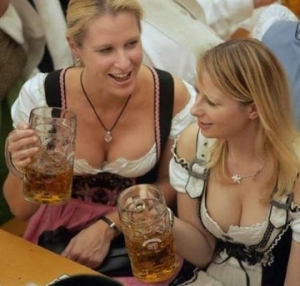 I don’t know if it’s me getting older, but these darn kids keep pushing Oktoberfest earlier and earlier.  It’s still too hot to wear lederhosen, for cryin’ out loud!

But kids will be kids, and beer is delicious, so let’s dive right in.

Capitol City Brewing Company is sponsoring Oktoberfest next Saturday, October 2, in Shirlington.  It’s $25 for a wristband and a glass with which to sample.  It’s free for non-drinkers (no judgement).

If you are a true beer lover, you may be more interested in the next weekend’s offering, the Maryland Brewer’s Oktoberfest on October 9 at the Timonium Fairgrounds.  Beer Advocate assures me that there will be twelve breweries as well as live music on two stages.  What else could you want?  You have a penchant for the ridiculous, you say?  Well, note the wife-carrying race, the award for which is your wife’s weight in beer.  Same goes for the beer belly contest.  If you have no wife and no beer belly, you’ll just have to try again next year.

There will be brats (which, really, there’s nothing like them), oompah music, a souvenier stein with the price of admission, as well as six drink tokens (in advance $20, on site $25).  Who doesn’t want to be German sometimes?