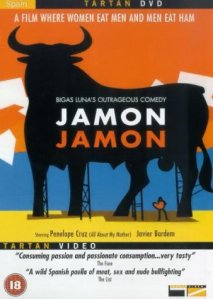 Sometimes, things are so good that when they finally do come to an end, you think you’ll never love anything again.  At least, that’s how it was with me and Spanish food.  Some people say Spanish food is simple or too raw and unworked, but those are the things I love about it.  The food put on the plate is simple, but they just don’t understand!  The history that goes into each ingredient is very, very complex.

Even the ham, or jamon, has a complicated life even before the pig is ceremoniously killed for the good of the diner.  For the best jamon, a special breed of pigs are raised only outside Salamanca, eat only acorns their whole lives, their legs are stored in salt for a season, then hung out for years in cold and hot weather to sweat the salt all the way through.  Then the jamon is sliced very very thinly and eaten with a small glass of cold beer or red wine.

So when I left Spain, I swore that I would never eat Spanish food outside the country itself.  When I broke this promise and had tapas at La Tasca in Chinatown I felt dirty and guilty, as well as swindled out of three times what the meal should have cost.  Eating the same food in the US just wasn’t the same.

So I went on a break.  I had many fun little interludes afterwards–Ethiopian, French, Irish bars, sandwiches from Philly, hamburgers with fried eggs (?)–but nothing really stirred my soul like Spanish food had.  And I was OK with that.

And a replacement doesn’t have to stir my soul to still be delicious.  I know this thanks to the fabulous happy hour at Jaleo.  I will be the first to tell you that Jose Andres is a restaurant genius, so I felt that I was in good hands as I entered the restaurant in Bethesda–too bright and spacious for a Spanish restaurant, but whatever.

Everything was Spanish but yet not Spanish.  The servers were too polite, too solicitous.  The plates were too complex, consisting of many converging tastes and textures but with just enough garlic and olive oil to keep it Spanish.  And in spite of how “good” (ick, it’s too nice!) everything was, I had a great time!  I accepted that Jaleo was not Spain and not trying too too hard to be Spain, but that both of us are just trying to be ourselves.  And I can still enjoy other cuisines, it’s no big deal; we’re cool.

I may even be ready to try seeing a closer representation of Spain: Estadio in Logan Circle (rave reviews).  But let’s take a break before we do that.
Tweet