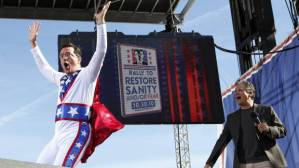 This weekend was distinct from any other time in my DC career.  This weekend was a time when it was cooler to be in DC than in New York.  Do you know what that means?  DC residents live with the latent knowledge that DC, though lovable, is not ever going to touch New York in terms of coolness.

But all that was reversed this weekend thanks to the Rally to Restore Sanity and/or Fear.  This Rally was similar to the Inauguration back in 2008 with one big difference: attendees were sure to have a sense of humor.  It may come as no surprise to hear that not all liberals have one.

In any case, hundreds of thousands of people attended the afternoon rally on Saturday.  Some were in costume, many brought signs.  I would have counted the rally a success based solely on the high sign-cleverness quotient.  But wait, there’s more!  There was music, entertainment, and atmosphere impossible to fully describe here.  For a full report, read these accounts or watch it online.  But keep in mind that anyone else’s commentary will be unutterably useless; the atmosphere on that day was intangibly joyful and negative reports just rankle me.

But after the Rally was over, I continue to be inspired to make at least a tiny effort to give people the benefit of the doubt.  During Stewart’s closing monologue/speech, he used the example of traffic merging into the Lincoln Tunnel.  Yeah, some jerk always zips up the side and cuts in, but for the most part, people do play nice in order to make things go.  Keeping that image in mind can help us (yes, us!) from getting irritated with each other’s differences.  As one of the signs proclaimed, Only the sane make it rain.

Besides casting pearls of wisdom at me, the Rally was good for one hell of a free concert.  I think I’ll be held over for a while; I saw The Roots, John Legend, Cat Stevens/Yusuf Islam, Ozzy Osbourne, the OJs, Mavis Staples, Jeff Tweedy of Wilco, Sheryl Crow, Kid Rock, T.I., and Tony Bennett.  Oh and R2D2.  Like I said, joyful, right?  Seeing all the different musicians on stage at the end brought the message home: let’s give each other the benefit of the doubt.  And turn off the TV from time to time.

Another sign for the times: Make sexual advances, not war.  Yes?  Yes.