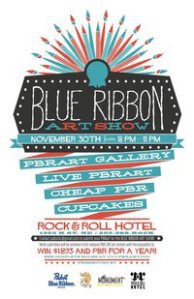 Not to be all Jane Austen or anything, but it is a truth universally acknowledged that hipsters love PBR.  Love it.  Can’t get enough of it.  And it has been a lucrative business for PBR, being the hipster beverage of choice.  City Paper recently did a track of DC’s resident PBR missionary, a very jolly guy from what I can tell (I ran into him passing out PBR at Sticky Rice a few months ago).  The article reads like a homing device for hipsters in DC.

Which takes us to the Rock and Roll Hotel last night for the Blue Ribbon Art Show.  Sponsored by BloomBars, a “training ground for a new generation of change agents” but really a non-profit community arts space, the top floor bar area was full of PBR-themed art.  There was a Sistine Chapel-type PBR painting, a landscape PBR, a Jackson Pollock PBR, a Lichtenstein PBR, a dinosaur PBR, and a trippy Dumbo-inspired PBR.  And of course, if looking at all that two-dimensional PBR makes you thirsty, there are $2 tall boys on sale at the bar.

But that’s not all!  Not only do hipsters love PBR, they love crafts.  Enter Hello Craft and their Make Something Awesome tables.  I made my own button and received instructions on how to make a Beer Box Greeting Card Set, a Knit Beer Koozie, and PBR coasters.

Thirdly and lastly, hipsters love competition.  Don’t think there haven’t been “who can shower the least” contests.  The BloomBar Blue Ribbon Art Show centers on the PBR-themed art.  The winner of the art contest wins $1,893 and free PBR for a year.

Think about who would want free PBR for a year.  Then think about who would want it badly enough to make a piece of art.  That was who was at Rock and Roll Hotel last night.  I felt extremely under-accessorized.  Sadly, it was a dark and stormy night, so it wasn’t as well attended as it might have been.  But never fear!  The final judging is this Thursday, so if you have some PBR art laying around, enter it at pabstdc(at)gmail.com.