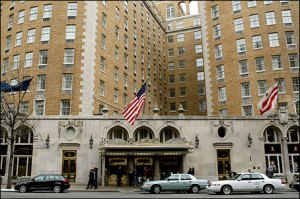 So how can I say this?  Let’s just get right to it, since the truth is so uncomfortable.  The Mayflower sucks.

I’ve never stayed there, and given its unfortunate history, let’s hope I never will.  But I do enjoy a fancy hotel cocktail lounge from time to time.  The Don Draper-ness of it all is attractive in the same way Conde Nast Traveler is attractive.  You wouldn’t want to read only excited accounts of exotic adventures all the time, but it’s a nice break…every once in a while.

I expected a similar experience at the Mayflower.  The hotel is a Washington standard.  Not the Hay Adams, but still, it’s generally regarded as ritzy.

So imagine my surprise upon entering the downstairs bar just inside the barriers of humongous flower arrangements, to be told that this bar is closed but you can go upstairs.  Not in a welcoming tone either.  We found our way upstairs to some overstuffed chairs crowded around low tables.  A stern-faced matron came to take our drink orders.  Upon her departure, she flung a mountain of napkins on the table.

Once the drinks arrived, I was surprised to see that they were served over ice in large glass tumblers and not up.  What is this, McFadden’s?

Aside from differences in cocktail sensibilities, there was the undeniable feeling of not being wanted.  It still happens in restaurants, but more in hotels, the staff can give the idea that your very presence is throwing a wrench in their daily routine and would you kindly leave?

Yes, I think I will leave.  But I’ll still walk in and use the bathroom whenever I want.