Alright, DC. I ask you to come with me on a journey through time. A time before…cupcakes. Gasp, I know! Why would I ask you to do that to yourself? Those were dark times, when we took drugs or drank special drinks to liven our mood. Those days are gone.

I hardly remember a time when I did not find it odd that the Washington Post ran a feature called Cupcake Wars for weeks on end. A time when Georgetown Cupcake did not have a television show (picked up for a second season and easily one of the most boring things I’ve seen since high school) and a bouncer. A time when men had to toss around for apology gifts to their wife/girlfriend, instead of just driving to the nearest cupcakery (yes, I used that word) for a sure-fire get out of jail free card. 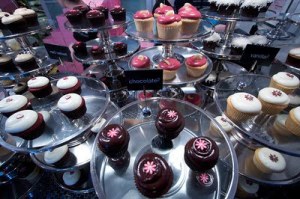 Yes, it’s been two years since Hello Cupcake opened in Dupont Circle. They celebrated today by giving out free cupcakes all day long, which I heartily endorse. It’s not the fact that they are delicious that bothers me (in fact, I am pro-deliciousness), but it’s the fervor, the willingness to pay any price, wait in a long, long line with tourists of the Midwestern and Eastern European variety that gets to me.
Georgetown Cupcake started the craze in DC back in 2008–Valentine’s Day, awwww. Then along came Hello Cupcake,Baked and Wired in Georgetown, Red Velvet in Chinatown, and on. Cupcakes are even on Groupon, for pete’s sake! Cupcakes are not something you plan for with a $25 for $10 gift certificate. They are bought in a moment of weakness: the gleam of the frosting and the sugar in the air overruling your better judgement.
I’m not saying I have not succumbed numerous times to this

temptation. But it’s getting out of

hand. Cupcakes in themselves are not frightening, but the knowledge that the next craze must build upon the insanity of the last (bangs coming back, then headband over bangs–don’t do it) is. What’s
next? Crepes? Maybe.
We shall see. Be safe DC. Don’t walk down M Street without a
strong willed friend to pull you away from the window. Because they are too delicious.